Home » Travel Destinations » France » Paris » Visiting the Deportation Memorial on the Île de la Cité in Paris
This post may contain affiliate links. If you make a purchase using one of these links it means we may earn a small commission at no extra cost to you.

While almost every visitor to Paris comes to the Île de la Cité—the island home to some of the most famous sites in Paris—most visitors miss the Deportation Memorial or the Mémorial des Martyrs de la Déportation. It can be easy to overlook the Deportation Memorial on the Île de la Cité given all the blockbuster historical sites—Notre Dame, Sainte-Chapelle, the Conciergerie—as well as the flower market and loads of souvenir shops that fill up the island.

But if you are looking for a more serious, quiet place of reflection, I would recommend a quick visit to the Deportation Memorial, which is a memorial to the 200,000 French citizens who died in Nazi concentration camps. We’ll share everything you need to know to visit the memorial and tell you about our own experience visiting the Deportation Memorial in Paris.

The Deportation Memorial is located at the eastern tip of the Île de la Cité (tip of the island near Île St. Louis) behind the Notre Dame cathedral.

There are a number of ways to get to the Île de la Cité by public transportation, but the closet metro stop is Cité. Other close stops are the RER B stop St. Michel Notre Dame and Metro stops Maubert-Mutualité and Pont Marie.

Once you are on the island, you should see brown signs directing you to the Memorial de la Déportation.

It is free to visit the memorial.

Our Experience Visiting the Deportation Memorial in Paris

We had been meaning to visit this memorial for two years. We typically stay in an apartment located less than a 10 minute walk from this site, but it seemed like we always were walking by before it opened and returning home after it closed. But this Spring we finally made it to the Deportation Memorial.

At the entrance, we were greeted by a woman with a clipboard. She asked us to be quiet and respectful while inside and that although you can take photos, photos of the interior rooms are meant only for personal use and not for public posting. So I will respect that and only post a few exterior photos of the monument. Given the small size of the interior space, they limit the number of visitors who are allowed inside so you may have to wait in a short line as we did.

Before visiting, it is good to read up a bit on the history of the German occupation of France and the experience of those deported to Nazi concentration camps to better appreciate the symbolism found in the memorial. The Deportation Memorial website is a good place to start and this article on the Holocaust in France should give you some basic information. There were a couple of information placards outside that provided some good basic information in English, but all the quotes and informational panels inside the memorial is in French.

The Mémorial des Martyrs de la Déportation was inaugurated in April 1962 by President de Gaulle and is a memorial to the approximately 200,000 people deported from Vichy France. The exact numbers of those who were arrested, interned, and/or died during the German occupation of France are unknown, but it is estimated according to the research indicated on the panel below that 160,000 people were arrested in France and deported.

Not all were French citizens, as many were Jewish immigrants who had fled from nearby European countries. About 85,000 of those arrested and deported were members of the French Resistance or political opponents (over half would die) and 75,000 were Jewish (approximately 97% would die, primarily in concentration camps). There was estimated to be about 340,000 Jews living in France in 1940 and about 75% are believed to have survived to the end of WW2. While political opponents and Jews were the main people arrested and deported in France, other groups (e.g., homosexuals, Roma, Jehovah’s Witnesses, Slavs, the disabled) were also persecuted by the Nazi regime as well. 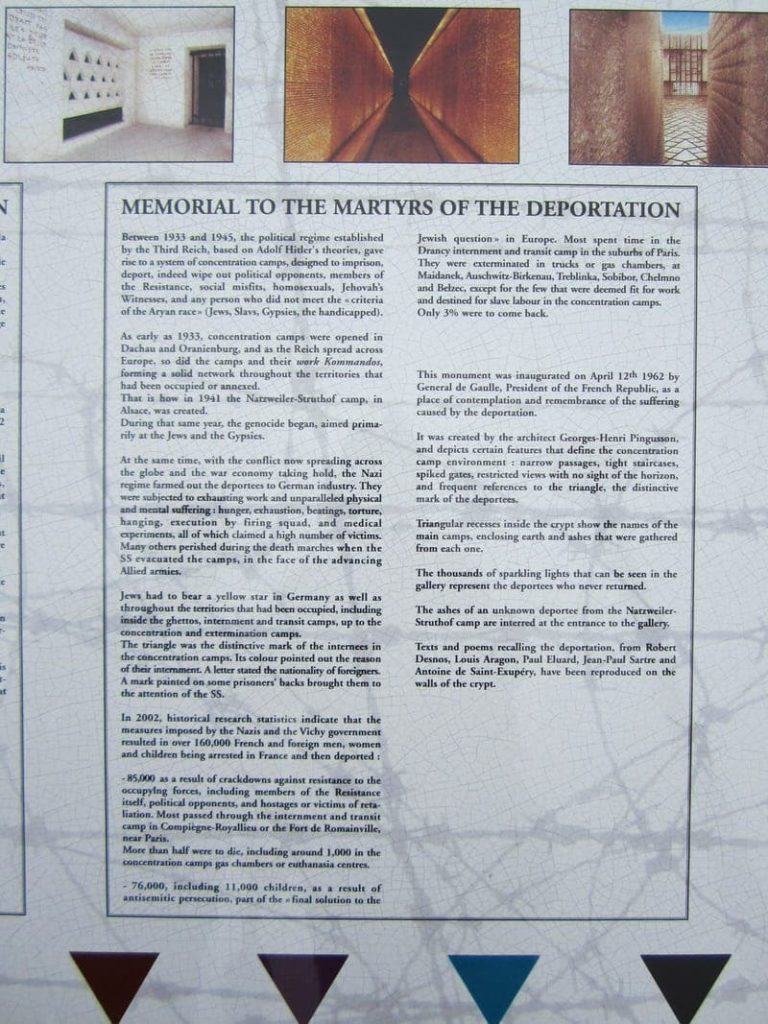 First, we walked down a set of steps and were immediately surrounded by gray stone walls. In front of us was a stark but frightening iron gate. We stopped and tried to imagine what it might feel like to be able to see the sky above you and even the Seine river below you, but not be able to escape because of the high walls and bars. 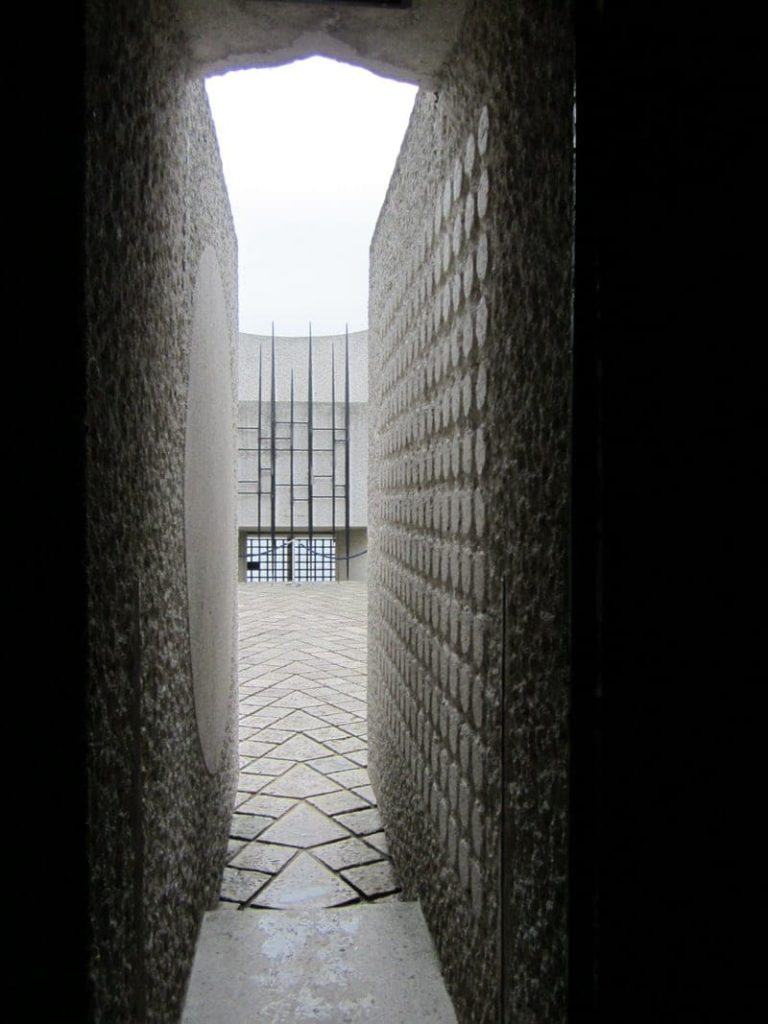 Next, we silently entered the interior of the memorial single file down a narrow hallway. The chamber is meant to feel dark and claustrophobic to give you a small taste of what it might feel like to be imprisoned. The site of the underground memorial was chosen because it used to serve as a morgue.

The hallway is dimly lit but lined with 200,000 illuminated crystals, each light symbolizing a deportee who died in the concentration camps. At the end of the tunnel is one bright light representing the eternal flame of hope. A circular plaque on the floor translates into English as: “They descended into the mouth of the earth and they did not return.” In the chamber and side rooms, you’ll see quotes along the walls from a number of writers and poets, including Louis Aragon, Jean-Paul Sartre and Antoine de Saint-Exupéry, as well as the names of concentration camps where French citizens perished. We also saw plaques, triangular urns (the shape of the identification badges prisoners were forced to wear) filled with ashes and dirt from the concentration camps, and a tomb of an unknown deportee.

As you exit, you see a message above you that translates to: “Forgive, but never forget”. Familiar words if you’ve visited other Holocaust memorials.

We spent only 30 minutes at the Deportation Memorial site, but we found it to be a very thought-provoking experience. While we are no strangers to Holocaust films and had only recently visited the Nazi Documentation Center, Dachau Concentration Camp memorial, and some other memorial sites, there is something powerful about the stark simplicity of this relatively small memorial site. At other sites, we’d sometimes felt overloaded with information or beat over the head with the horrors of the concentration camps, but here you are left more to just think and experience as you walk slowly and silently through this memorial.

While we certainly learned more about the Holocaust at many of the other museums and memorials, there is something very powerful that we took away from this visit. It is also a great place to stop and honor the memory of all those lost in World War II.

As we left the memorial and rejoined the hordes of people on Île de la Cité, we were both struck by the stark contrast between the “quiet prison” and the hustle and bustle of busy Paris tourist sites like Notre Dame.

Have questions about visiting the Deportation Memorial in Paris? Have you visited the memorial? We’d love to hear from you.