Home » Travel Destinations » Vietnam » Afternoon Tea in Ho Chi Minh City: Taking a Break at the Caravelle Saigon Hotel
This post may contain affiliate links. If you make a purchase using one of these links it means we may earn a small commission at no extra cost to you.

If you are planning a trip to Vietnam, you may not be thinking about places to go for afternoon tea in Ho Chi Minh City. For most people, Vietnam does not conjure up images of high tea, but you’ll be surprised by how many of the old grand hotels—and some of the shiny new ones—are offering up some pretty fantastic afternoon tea menus. We found afternoon tea to be a much-needed respite from the heat, the crazy motorbike traffic, and the hustle and bustle of this clearly booming city. One of the grande dames of old Saigon, the Caravelle Saigon hotel, had just recently revamped their afternoon tea menus about a month prior to our trip, and we just had to stop by and have tea here. The Caravelle Saigon hotel now offers three tea menus—Traditional English, Vegetarian, and Vietnamese—and yes, after not being able to decide, we just had to try them all! Read on and we’ll share a list of places for afternoon tea in Ho Chi Minh City, our high tea experience at the Caravelle, and a little bit of history on this historic hotel. 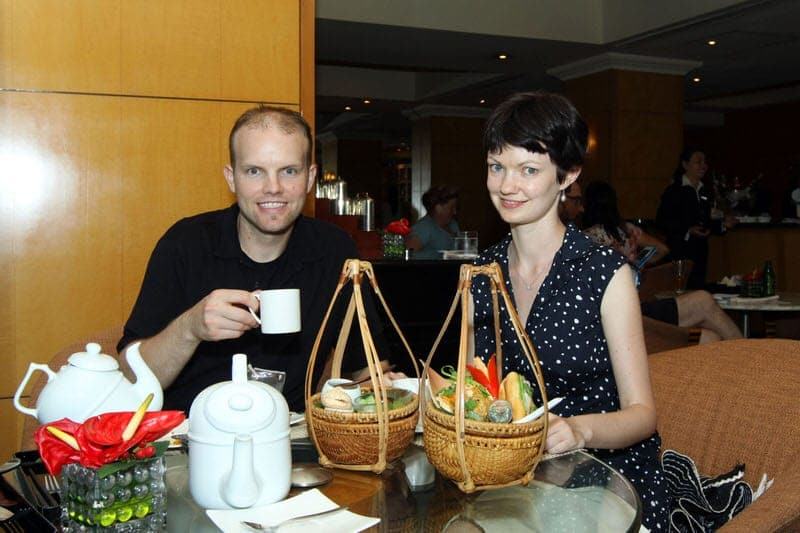 While we had afternoon tea at the Caravelle Saigon hotel which came very highly recommended to us, there are, of course other places you might consider. Always check or call ahead as afternoon tea is not always offered daily and some places may require reservations. Here is a list of some places you might consider for high tea in Ho Chi Minh City, most of which are located in the central heart of the city in District 1.

Basic Information about Afternoon Tea at the Caravelle

Our Experience of High Tea at the Caravelle Saigon Hotel

Our walk to the Caravelle Saigon hotel took us into the heart of historic Saigon as we walked along the riverfront and then turned onto the former infamous Rue Catinat, now named Dong Khoi. For someone who loves old hotels and buildings, this walk was a treat as you pass the Hotel Majestic, the Grand Hotel Saigon, the Hotel Continental (oldest hotel in the city). and the Opera House before arriving at the door of the Caravelle. The Caravelle may not be the oldest building in this historic area, but it has earned its place in the city’s history. The Caravelle Saigon hotel (then the Caravelle Hotel)  had a glitzy public opening day on Christmas Eve 1959 full of champagne and merriment, but its arrival would come during a time of increased discontent in Saigon. The grand sweeping views offered by the 10th floor rooftop terrace, the tallest at the time, would soon become not only a fashionable place for drinks, but would become a safe lookout point for foreign correspondents in wartime Vietnam. The Caravelle would become known worldwide as many of the great reporters, journalists, and diplomats in the later half of the 20th century worked within this building and drank on its rooftop terrace covering the long, sad struggle of a nation at war. The Caravelle has continued to update itself and in 1998 opened a luxurious 24-story tower to compliment the original 10-story building and remains a leading luxury hotel in Ho Chi Minh City. A few of its recent past guest include former American president Bill Clinton and actors Michael Caine and Brendan Fraser (while filming The Quiet American). 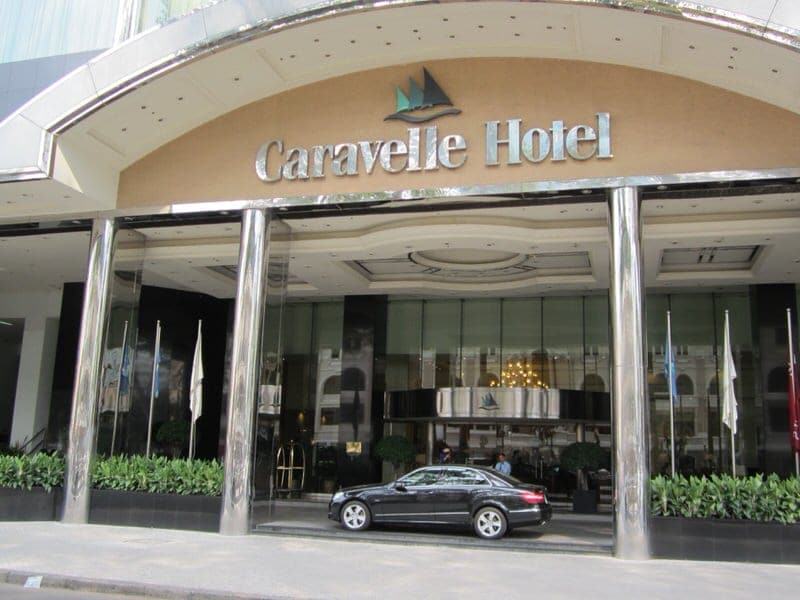 We chose to a have a more local experience of renting an apartment on Airbnb on this visit, so we did not get to try out the luxurious rooms of the Caravelle on this trip. The entrance to the hotel is right across from the old Opera House and very close to the Continental Hotel, credited as the first hotel in Saigon. We were greeted at the front desk and pointed in the direction of the Lobby Lounge. Here we met briefly with the hotel’s General Manager John Gardner who has been involved in the revamping of the tea menus. Mr Gardner explained to us that he is excited for both the new tea menus and upcoming renovations to the lobby lounge, called the Café de l’Opera, which will expand the lounge over the next several months, providing even more room for guests to enjoy afternoon tea and drinks. The Café de l’Opera has floor-to-ceiling windows along one side with views of the busy street, the Opera House, and the bougainvillea-laden balconies of the Hotel Continental across Lam Son Square. These views will not change with the renovations but the seating space and natural light will be increased.

The tea menus were presented and we had a hard time choosing which two of the menus we wanted to try. We finally decided on the Traditional English and the more exotic Vietnamese menu. However, when talking to the staff about the uniqueness of offering a specifically designed Vegetarian tea menu, we were persuaded to try this one as well in order to see how it compares to the Traditional menu. Below are each of the menus offered during our visit. 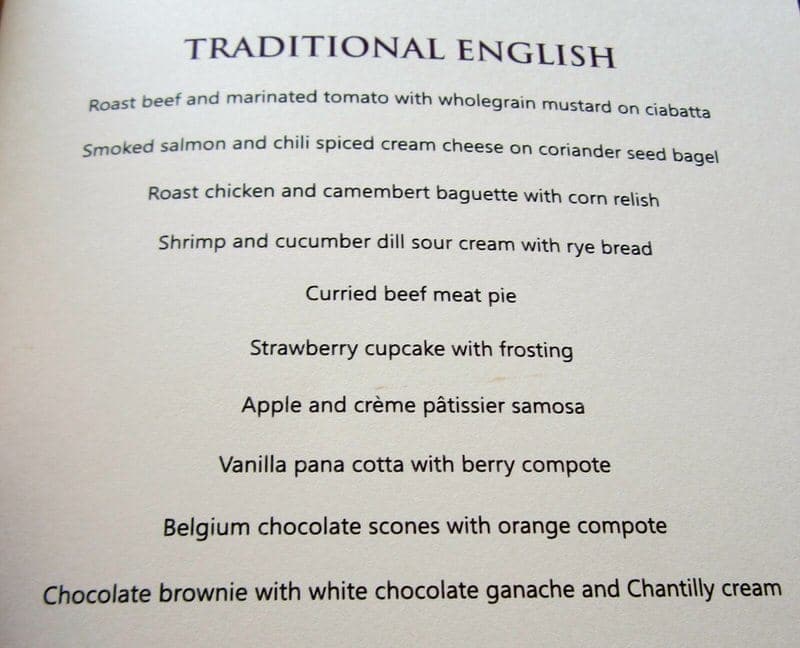 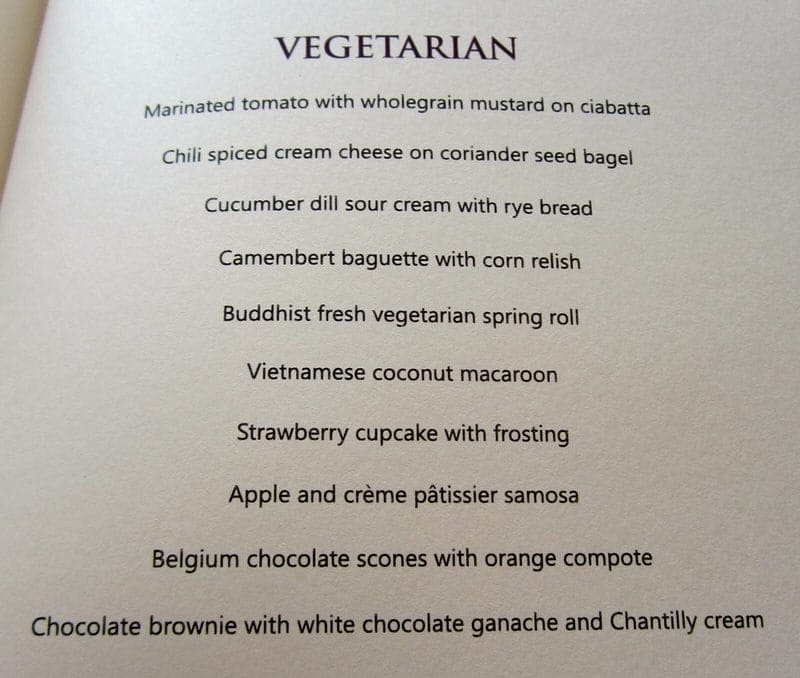 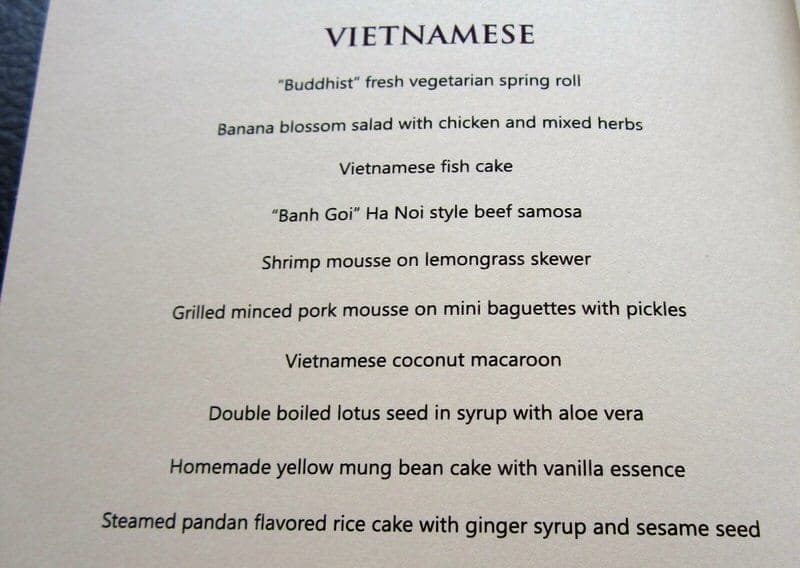 Each of the tea menus comes with a choice of Ronnefeldt tea or Lavazza coffee, cold or iced. There were several teas to choose from and we both ended up choosing a Darjeeling; I chose the Summer Darjeeling and Ethan the Spring Darjeeling. 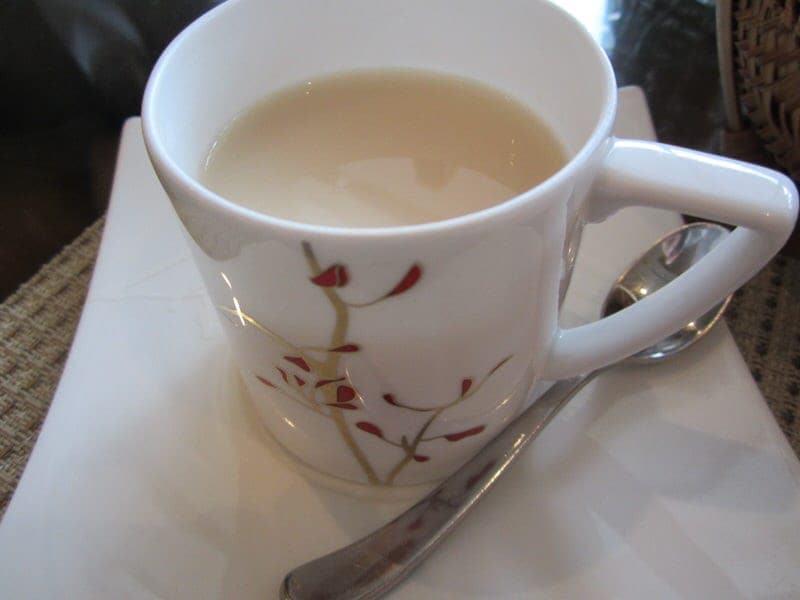 Afternoon tea in Ho Chi Minh City was a well-needed respite for us from the heat, traffic, and sightseeing. It was nice to be able to sit with a pot of tea and watch the traffic from the cool of the elegant Lobby Lounge.

It was definitely a “wow” moment when all the food arrived. We expected all the food to be on silver tiered trays but the Vietnamese food was served in these little baskets which just seemed so much more appropriate. It made quite the beautiful spread on the table and we set forth with the hard task of trying to actually eat all of this! I am pretty sure other patrons were wondering what we were going to do with all this food! 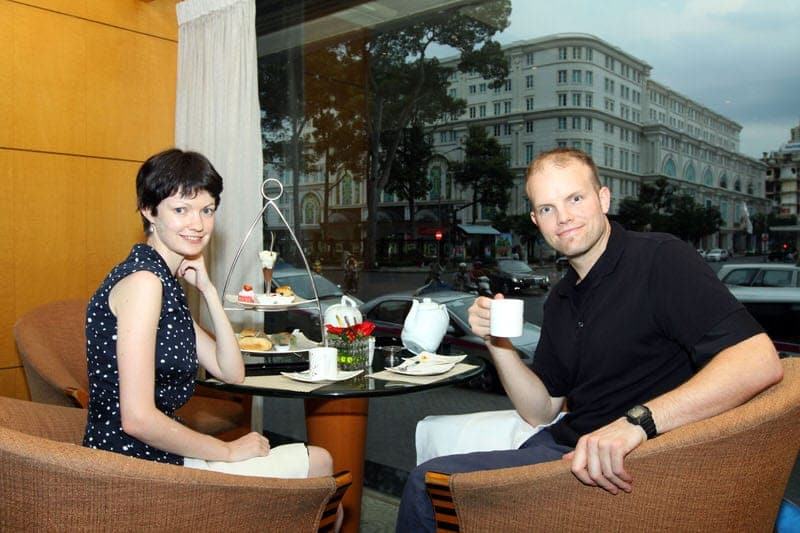 The food was really wonderful across the three tea menus. Each contained 10 different food items and Ethan and I tried to split and sample everything. It was a bit surprising how similar the Traditional English and Vegetarian were in taste with the sweets essentially being exactly the same and the savories were still very good in their meatless form. Actually, I think Ethan and I both thought the spring roll was one of our favorites which is found in both the Vegetarian and Vietnamese tea menus. From the meat selections, I really liked the hearty beef pie and Ethan preferred the roasted chicken baguette. In the Vietnamese baskets, the banana blossom salad and spring roll were both two of our favorites. This was only our second day in Vietnam and this was definitely an opportunity to try some Vietnamese specialities. The dessert items in the Vietnamese menu were definitely different for us and we enjoyed them, but I think Ethan preferred the sweeter European style desserts on the other menus. The scones were quite good as were the other desserts, although I have to say by the time we got to the panna cotta, cupcakes, etc. we were quite full. Overall, we enjoyed the food from all three afternoon tea menus. I think Ethan said the Traditional English was his favorite and for me it would be a toss-up between the Vegetarian and Traditional English. However, that said we would both highly recommend trying the Vietnamese menu over the other two as this is a great opportunity to try something more exotic and interesting. I think I would also suggest choosing a green, oolong, or herbal tea to accompany the Vietnamese tea as our black teas with milk were probably not the best accompaniment to the Vietnamese menu. For Vegetarians, I think the Caravelle Saigon menu offers a unique opportunity to get a full tray of tea food with no substitutes!

I think Ethan and I could have easily shared one tray of food and then still been able to have dinner that evening. However, we did manage to somehow eat almost all of the delicious food, minus a couple of the repeat desserts (most are the same between the Traditional English and Vegetarian menus). Not surprisingly we had to cancel our dinner plans with a friend and we ended up meeting her for drinks instead as we did not need to eat again that day!

Speaking of drinks, there are several prime spots for great city views and sunsets in Ho Chi Minh City, and the Caravelle still sports the same 10th floor rooftop terrace bar as it did when it was used as a lookout point for the foreign press. While wholly renovated and no longer the tallest building in town, the Saigon Saigon Bar still evokes some of the historic flair of Old Saigon and offers great views of the city. You can find a full list of our picks for bars with views and rooftop terraces in Ho Chi Minh City. 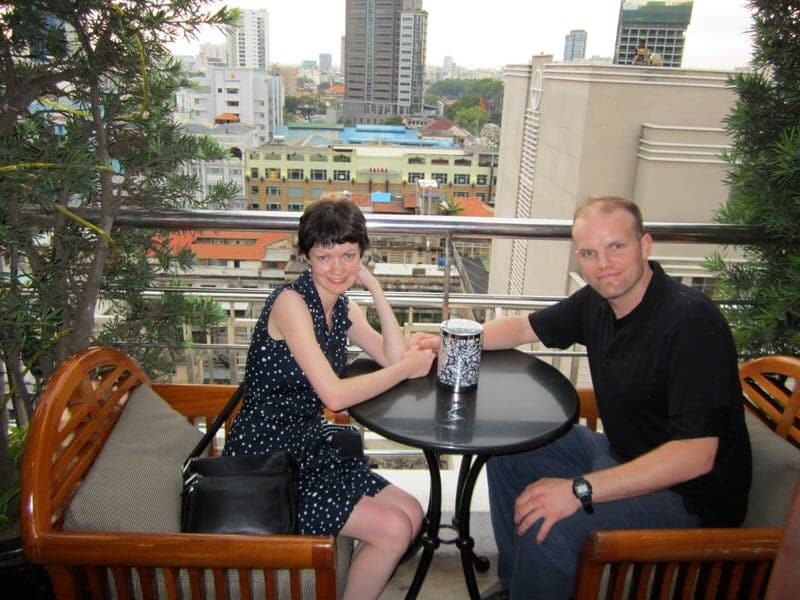 If you are heading to Ho Chi Minh City, consider a stop at the Caravelle Saigon hotel for afternoon tea, or if tea isn’t your thing, consider a drink in the historic rooftop bar. Both come with a touch of historic elegance, scenic views, and good drinks. Do you enjoy afternoon tea?

**Disclaimer: We received complimentary tea and food in order to review the high tea menus; however, this article contains only our own honest thoughts and opinions. We did not receive any financial compensation for the writing of this post, do not work for the Caravelle Hotel, and receive no commission for any hotel purchases or bookings.**