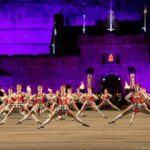 Edinburgh festivals are well-known around the world, lending the city one of its nicknames, Festival City. But did you know that almost half of the major festivals in Edinburgh take place during the month of August? Edinburgh is home to 11 major festivals each year, and five of these festivals take place in August. These summer festivals in Edinburgh celebrate art, theater, culture, books, and even the performance of military bands. Events range from the traditional (opera) to the intellectual (talks by famous authors) to the downright zany (performance of an acrobat doing handstands on eggs)! August is a busy but special time in Edinburgh as the historical capital city welcomes hundreds of thousands of visitors from around the world. It can be overwhelming to a first time (or even second time) visitor. There are hundreds of events and performances each day in the city during August, and in one day… END_OF_DOCUMENT_TOKEN_TO_BE_REPLACED 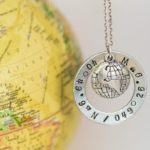 If you love travel and jewelry you’re probably going to love this guide to jewelry for travelers! We focus primarily on handmade and unique travel jewelry, and cover jewelry that will suit any budget and style. I fell in love with travel themed jewelry while searching for travel themed wedding rings for Laurence and I’s wedding. I have since acquired more travel jewelry pieces and love using jewelry as a way of expressing my passion for travel. We’ve put together a list of a wide range of travel jewelry items in this article for those looking for a way to express their own love for travel, searching for a gift for a traveler, or just looking for inspiration about what types of travel themed jewelry are out there. Our list contains dozens of items that span the range of jewelry types, budgets, and fashion tastes. Although many of the jewelry… END_OF_DOCUMENT_TOKEN_TO_BE_REPLACED