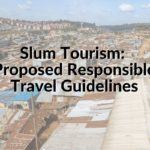 Slum tourism is defined as the practice of travelers visiting poor urban areas, typically in the Global South, to view the impoverished conditions and understand more of the lifestyles of local inhabitants. It is also known as poverty tourism, township tourism, community tourism, and other terms. Tourism is often used to help alleviate poverty, but in this case, poverty is also the attraction. It is a controversial tourism practice but one that has become increasingly popular. Slum tours are particularly popular in South Africa, Brazil, and India. It was estimated by Frezel et al. (2015) that over 1 million tourists take a slum tour each year. The goal of this article is to provide information that will be useful to both those interested in learning about the practice of slum tourism as well as those travelers who are considering taking a slum tour. We begin with providing information on the… END_OF_DOCUMENT_TOKEN_TO_BE_REPLACED