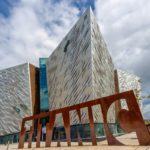 Belfast and the Titanic will forever be linked together in history. It was in Belfast that the RMS Titanic would be designed, built, tested, and launched out to sea. In 1912, she was the world’s largest and most luxurious ship. However, it would be the ship’s tragic sinking on her maiden voyage, rather than her construction, that would make the Titanic famous around the world. Although the world’s most famous ship may lie at the bottom of the Atlantic Ocean, you can still find close links to the ship in Belfast today. You can visit the Titanic Belfast, which is a large visitor attraction that tells the story of the RMS Titanic from her design and construction to the sinking and its aftermath. It is located next to where the Titanic was built and is the largest attraction in the world dedicated to the story of the Titanic. It has… END_OF_DOCUMENT_TOKEN_TO_BE_REPLACED