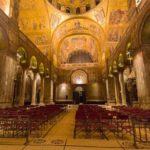 Visit the Doge’s Place and St. Mark’s Basilica without the crowds? St. Marks’ Basilica and the Doge’s Palace are two of the most popular places to visit in Venice, and although they are must-see stops for travelers, they also tend to be very crowded. It can be hard to enjoy these historical sites as you are standing in lines, jostling elbows with fellow travelers, and trying to see around selfie sticks and flag-waving tour guides. Walks of Italy, an American-based walking tour company, has come up with an eloquent solution for this dilemma. They have designed a tour that allows late entry into the Doge’s Palace which is a time that the palace is typically quiet, and most importantly they have received permission to run exclusive after-hours tours inside St. Marks’ Basilica. So you get to experience St. Mark’s Basilica as very few people do, alone with only your tour… END_OF_DOCUMENT_TOKEN_TO_BE_REPLACED 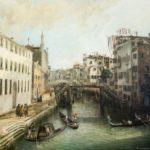 During our trip to Venice, we did a Context Travel walking tour themed around Casanova’s 18th century Venice. Giacomo Girolamo Casanova was an Italian adventurer, author, and womanizer who was born and lived in Venice during the gilded and decadent eighteenth century. Perhaps best known for his daring and amorous exploits, Casanova’s autobiography is considered one of the best sources of European lifestyles and customs of the 18th century. Between the 13th and 17th centuries, Venice had amassed significant power and wealth through trade although its power was rapidly fading by the 18th century as the republic was no longer a major center of international trade. In the 1700’s, or Settecento, Venice became known as a place for leisure and pleasure, with the 18th century being considered the most hedonistic period in Venetian history. This period is often symbolized by gilded palazzos along the Grand Canal, lavish fashions, elaborate parties, elegant cafes, mask-wearing… END_OF_DOCUMENT_TOKEN_TO_BE_REPLACED