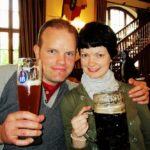 Germany is well-known for its beer culture with Munich being home to the long-running Oktoberfest and the world-famous Hofbräuhaus beer hall, both of which attract millions of beer-guzzling tourists each year. However, attending Oktoberfest is not the only way to join in on some sudsy Bavarian fun and there are plenty of other German festivals and ways to experience beer in Bavaria. Hofbräuhaus is the world’s most famous beer hall and one of the oldest beer halls in Germany, regularly packed with rowdy tourists (and brave locals) throughout the year. A pilgrimage to the Hofbräuhaus is worth it, but we suggest that there is more to experience at this famous site than simply drinking beer and eating sausage and we’ll share how you can learn more about the beer culture in Germany here. To get away from the tourists, we suggest that in addition to the popular Hofbräuhaus that you also seek out some… END_OF_DOCUMENT_TOKEN_TO_BE_REPLACED